Growing up and living in a small town has far more benefits than detriments in my own experienced opinion. I get to visit parks, shops, theaters, and restaurants that have been around as long as me, some even longer. Though change is an unavoidable necessity, I can honestly say the soul of Vero Beach remains firmly intact. One institution which has remained resolutely local is Bobby’s on the beach. Located on Ocean Drive, they are still serving up some of the best food and drinks with a cozy small town atmosphere. New establishments come and some may go, but Bobby’s is here to stay.

My most recent lunch rendezvous included my best friend Craig along with Mom and Dad. Craig was over from California for a few weeks of holiday fun, and so we all agreed on a time and place to catch-up over food and a drink. Camera in-hand, Craig made sure I would have pictures to remember the day with.

No one in town does French Onion Soup better than Bobby’s. No one. Prepped, cooked, and baked in an earthen-ware crock, it is served piping hot with a blanket of brown crusted ooey-gooey melted cheese nirvana. Underneath awaits an ocean of melt-in-your-mouth caramelized onions along with swollen chunks of soup-soaked bread that often requires two bites instead of one, and I wouldn’t have it any other way. An exquisite balance of cheese, onions, bread, spice, salt, and what I would assume is beef stock, she is comfort food personified.

French Onion Soup aside, a different stand-out favorite was calling to me that afternoon: the infamous Bobby’s tuna melt. Over the years I have savored more of their tuna melts than I could count, nor would I want to. The pleasure is in the moment where flavor, ambiance, and company came together to create cherished memories. As always, my tuna melt was lipsmackingtastic. The crust was golden and crunchy while inside was a melted paradise of tuna, mayonnaise, spices, cheese, tomato, lettuce, and love. Comfort food personified, take two.

I don’t remember what Craig ordered, but while he enjoyed his meal, Mom was in hog heaven, literally, with the Irish pizza. Dad started with a cup of their world famous chili (OK, it’s not world famous but it should be) followed by their chili cheese nachos. I didn’t hear any complaints from anyone; just the sounds of contented snarfing interspersed between pleasant pockets of jovial chatter.

No moment is complete without a good drink, and Bobby’s is no exception so long as you stick to the hard stuff behind the bar. For as long as Bobby’s has been serving up dining memories, so too have they been serving up the same-old humdrum beer. Granted, the beery landscape was equally humdrum not all that long ago, especially in Florida, but times have changed and are continuing to change in many wonderful beery ways. Before ordering my Makers Mark Old Fashioned (muddled), I enquired as to their beer selection. Some of the choices included Heineken, Yuengling, Corona, Bud Light, Miller Lite, and a few others of unremarkable regard. Yuengling is a decent offering, but between Yuengling Lager and a good cocktail, not good enough to win against the cocktailarian in me. Despite what you, the reader, may be thinking right now, Heineken is not a good choice for the simple fact none ever make it stateside without an unhealthy dose of skunk.

Arriving in excellent form, my drink didn’t last long, prompting the arrival of another Makers Mark Old Fashioned. While savoring my drink, I couldn’t help but ponder the despondency of a flavorful beer landscape. An artisanal beer or three of aromatic and flavor diversity would be at home at Bobby’s along with pleasing a growing number of Vero Beach beer geek foodie aficionados. And then there is the wholly untapped market of roving seasonals who are also beer geek foodie aficionados, but I’ll save that literary escapade for another day. Great food demands great beer and vice-versa. Hopefully in a not too distant future, I will be able to wile away the better part of a day savoring Bobby’s food with a glass or three of inspirational beer. Until then, I’ll stick to my cocktails. 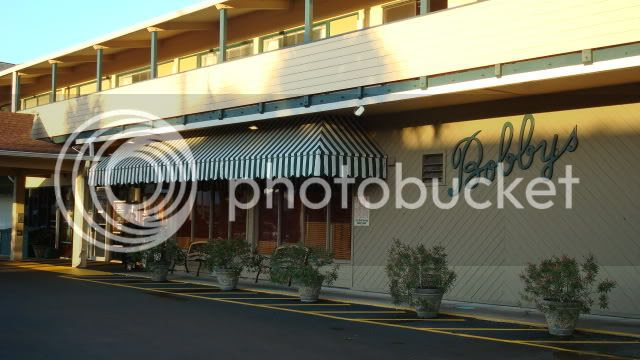 (an original written work by Kristyn Lier. plagiarism is not tolerated)
Posted by Kristyn at 4:07 PM