*obligatory disclaimer: In no way whatsoever am I claiming originality with the naming of my next foray into literary beer land. There will always be just one Beer Hunter: Michael Jackson. The world of beer he brought into my life is expansively irreplaceable, and so I offer up this humblest of thanks in my continuing hunt for great beer.*

Now that I’ve cleared the air for any potential lawsuits, let’s get to the beer hunting at hand.

The few years I lived in Eugene, Oregon opened my eyes to the tasty potential of natural food markets (stores). Wholesome food, reasonable prices (usually), diversity, and an overall ambiance of good will towards people and Mother Earth. An occasional cloud of snobbery would waft on by but thankfully never lingered long.

Fast-forward a few years and quite a few more moves later and I am back soaking up the sunshine in beautiful Vero Beach, FL, land of Publix, Winn-Dixie, and Wal-Mart. Natural food markets? Not likely, though that all changed in August 2009 when a Fresh Market opened right up the street from me.

Being a beer geek, my world rightfully revolves around beer pretty much 24-7. The only unknown is whether or not I dream of beer, but since I can’t remember those… Otherwise, I eat, sleep, breathe, and drink of life one beer at a time. From inspiration to beer to the history, culture, stories, people, and taste within; beer is beautiful. Fresh Market would be a natural fit for the beer lover’s diverse palate. Or at least, I hope it is.

So, how did my ideological fantasy fare against the cold hard reality of their beer selection?

If I was in a grading frame of mind, I’d give Fresh Market of Vero Beach, FL a “C”. Or, in laymen terms: average. They didn’t fail miserably as so many often do, but they could do better if they tried. As a store, if your beer planagram consists of the Big 3 and little to nothing of anybody else, you get a big fat FAIL! From me. To pass with flying colors, you would have little to none macro beers and a sea of fine craft and import beers in which to explore. Now, it should be said, known, and a given that part and parcel with a good beer selection is the responsibility of proper care such as: FIFO, date monitoring, display, handling, and storage. When all these factors come together in beery harmony, life is good for both consumer and retailer.

On all fronts Fresh Market averaged out. They feature a mish-mash of macro beer and craft beer. The shopper has the option to Mix&Match in their limited singles section while the rest remain in their original individual packaging. My most recent trip a few days ago ended with a mixed 6pack of macro light lagers (domestic and import) that I have yet to taste. I also noted some questionable Estrella Damm singles that had a disturbing layer of sediment on the bottom along with a “beers of the world” gift set of macro import beers being marketed as “craft beers”. Neither the best nor most accurate of marketing, to be sure, and unfairly misleading for the uninformed consumer who relies on their retailers to keep them properly informed. As for the Estrella Damm, I can’t read coded dates, but I know that on a lager, especially an import lager, a layer of haze and sediment at the bottom of the bottle is not a good thing. A few bottles back, there were some that were crystal clear so it was obvious that the few bottles in front were older. Now, that’s a good example of FIFO on one hand, and a bad example of selling potentially bad beer in regards to the older bottles. Other than those few discrepancies, I didn’t notice any other glaring stains of shame.

On the brighter side of beer, mixed in with the usual Big 3 suspects is a solid showing of craft(y) beer which includes Samuel Adams, Sierra Nevada, Anchor, Dogfish Head, Rogue, Brooklyn, Harpoon, and a few others I may be forgetting. Nothing ground breaking, but all are solid performers who have proven their mettle over the years through quality and consistency without compromise. A few I did not see but wish I had taking into consideration once again the overall standards of Fresh Market: Brooklyn Local 1, Brooklyn Local 2, or any Brooklyn beers for that matter, and Chimay. As I stood there gazing at their beer, a perplexing dilemma treaded dangerously close to my sound reasoning:

Why is it and when was it that our standards of quality, consistency, originality, and pride in ourselves as individuals and as Americans sunk so low that settling for second-best is an acceptable norm?

All one has to do is travel north to Downtown Produce in Melbourne, or south to Whole Foods in Palm Beach Gardens to see what a natural food market can do with a diverse selection of quality craft and import beers. Florida may be behind others in the world of real beer, but she’s not crippled and Vero Beach is an untapped market of thirsty beer geeks eagerly waiting for a beery oasis to reveal itself unto them. Fresh Market has the potential, so the real question is if they will realize it. For now, leave the beer shopping for elsewhere *coughgreatspiritscough* and stick to all the other wonderful natural food market delights Fresh Market has to offer both you and me. 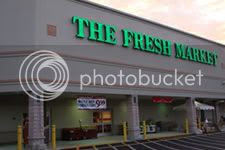 (an original written work by Kristyn Lier. plagiarism is not tolerated)
Posted by Kristyn at 3:02 PM