During my two year tenure in Eugene, OR there were a few life altering experiences that still reverberate in my day-to-day life. At the heart of it all is pizza, seconded by beer only because though my exposure was vast nary a drop touched these lips. I was dry back then but thankfully no more. While I have since found good beer as far as the eyes can taste, truly life altering pizza has been frustratingly absent. Since relocating from the snowcapped evergreen back to the tiki-topped sand dunes of Vero Beach specifically and Florida generally, years have passed devoid of the sensorial enjoyment that is artisanal pizza. Just as in beer, the craft in pizza is packed with love, care, flavor, and I’ve finally found it. 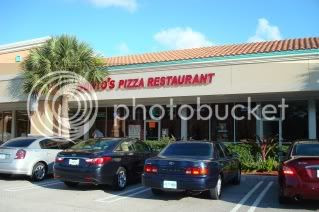 Located along St. Lucie West Boulevard, Santo’s is nestled within an unassuming suburbia shopaholic paradise – the strip mall. With a palm tree obstructing most of its neon call sign, tis easy to drive on by as we unfortunately do most things in life these frenetic days. But Santo’s is a moment worth stopping for because what is one’s rush hour blur is another’s timeless treasure. Quaint and kitschy at the same time, what awaited Laura and me as we passed through those doors was nothing short of pizza fantasia. As mouthwatering wave after mouthwatering wave threatened to overload the senses, a procession of spice, herb, dough, sauce, garlic, and olive oil (to name a few) permeated the air along with a hearty din of merry-making. Taking in the extremely open air kitchen before us, there was nowhere to hide as pizza pasta garlic-knot creationism evolved right before our eyes.

Packed wall to wall, the only reason we didn’t have to wait was because just as we entered a two-top left and we sat down. As dusk waned into night, this same dance repeated itself over and over again, broken only by the multicasional To-Go pickups. With a flow of patrons almost as seamless as the food, a bustling impression was left upon my person. Slow days? Me thinks they have none.

Bustle aside, good things are worth the wait even though ours felt a little longer than normal. Imagination? Possibly. And so to ease our pangs of hunger, an order of fried ravioli arrived ready to please in-between. 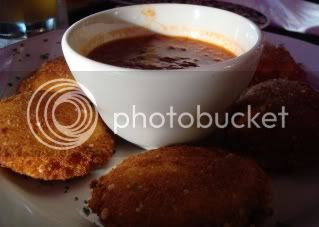 Before and during our delicately delectable fried ravioli, we perused the vast varied menu on record at Santo’s Pizza Restaurant. Variety is always the spice of life which only made our decision of which pie to slice into all that more difficult. Through determined perseverance, we struck upon a fine burgundian plan thanks to my Love spying a new promotional poster. Properly enlightened, our selection of one 18 inch pizza was broadened to a choice of two 12 inch pizzas. Amen, hallelujah, and peanut butter.

With just 12 inches of circumference to conquer, Laura and I could choose two tastetacular escapades instead of just a mere one. Flavor in numbers? Maybe. What I do know is that our decision though difficult was final – ‘broccoli rabe, sausage, fresh garlic, olive oil, crushed red pepper’ and ‘prosciutto, capicola, olives, artichoke, and fresh garlic’. The crust? Thin, of course. A few scintillating pictures later, all our senses were wholly engaged in a full body assault on the two pies in hearty appreciation. As blissful moans of satisfaction filled the air around our two-top, plans for future pizza excursions were duly noted. The broccoli rabe proved an easy favorite with her rich marriage of olive oil, herbs, garlic, and umami savorance the likes of which sent shivers up and down the spine. The prosciutto was meatarific but just a bit too salty for my personal taste. 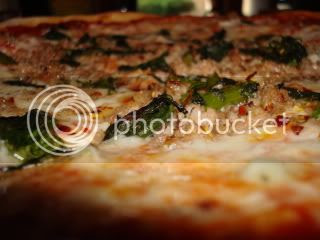 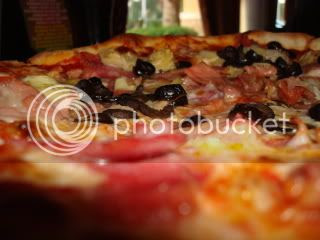 Pizzavana aside, this is ultimately a BEERhunt and though I have traveled a long road, the beer is lacking. In Kristyn’s dream world, good beer is everywhere to be found. In Kristyn’s real world, tis not so easy. A previous inquiry with veteran Santo’s patron and good friend Mark Boland revealed that there may be beery hope waiting, but reality can be a cruel mistress. As I perused their macro list of mediocrity, a faint glimmer of hope shone in the form of Southern Tier’s Phin & Matt, a crisp hoppy crunchy American pale ale. Unfortunately for us the keg had blown earlier that day with no back-up on hand. Dangnabbit! Beer foodie perfection was thwarted once more. With Widmer’s faux Hefeweizen the only other craft option on the table, two mugs of Widmer were ordered and drunk in unimpressed unison. Meh. Alright but nowhere near inspirational or pizza/pasta friendly. Mugs drained, our next drinks were of the nonalcoholic nature – coke for my Love and water for me. We both agreed twas better to save our beerly desires for the next and final destination of our evening: Vine & Barley.

(an original written work by Kristyn Lier. plagiarism is not tolerated)
Posted by Kristyn at 9:26 AM