In my younger years when time was free and responsibilities scarce, getting together with friends was a daily pleasure. Throw a car into the mix and the possibilities were endless. Fast-forward to now where time is money and responsibilities bountiful, getting together with friends requires a bit more effort which is unquestionably worth it. Their lives mingled with mine bring an innumerable wealth of riches to my hearth. It had been at least a month since I had seen Eric, a friend dear but not so near, a travesty that needed to be corrected. An immediate date for Monday was made and come that afternoon, I mounted my trusty steed and cruised south to check out Eric’s new pad, shoot the breeze over beer, enjoy a fantastic sunny Florida day, and eventually rustle up some dinner.

I found Eric’s new abode with nary a hitch thanks to the modern wonder that is the GPS. While unassuming on the outside, the inside was painted in luxurious Victorian reds and sepia browns, the floors a mix of wood and tile, and guarded by two adorable pooches, Toby and Jesse. Uh-oh. I did not realize dogs were involved. Enter Eric the Great to my rescue with a generic 24 hour Zyrtec. With drugs firmly in my system and allergies sufficiently suppressed, our afternoon of relaxation began. Joining us for a better part of the day was Eric’s friend, coworker, roommate, and proud owner of said humble abode, Ally.

As the hours waned, my stomach interrupted our joviality with firm protestations of attention deficit, and so Eric and I set out for dinner at the Town Crier Pub. We took the back roads for a lazy drive through the setting sun and just as night arose, we arrived thirsty and hungry. Since it wasn’t freezing outside, the tarps were gone, revealing a quaint outdoor patio where we promptly made comfy. The heat lamps that had previously kept me toasty-warm now stood forlorn in the background, their services no longer needed. Or so we thought. It had been so wonderfully sunny all day long, the thought of a cold evening never crossed out minds. We were wrong. Our first merry libation was more of that new golden delight from Samuel Adams, the Noble Pils. For me it was a long-overdue reunion, and for Eric it was a successful first date. Sipping our Noble Pils, we slowly browsed the menu before deciding on an appetizer and entrée each along with a communal side dish.

(On a side note, there is no smoking allowed outside on the patio, making the Town Crier Pub effectively a smoke-free environment.)

I started with the New England Clams Casino. A passel of tenderly breaded turtleneck oysters with shallots, topped with red and green pepper, garlic, butter, and breadcrumbs were baked to golden-brown perfection atop a bed of rock salt and served in the white pan they were baked in. A vision to behold and even more so to eat. Melt in the mouth comes to mind as each morsel did exactly that. Eric’s Four Cheese & Herb Flatbread was prodigiously chosen seeing as cheese pairs so well with beer. A thin melted cheese nirvana (mozzarella, pepper-jack, provolone, and parmesan) arrived topped with just the right amount of basil, garlic, and herb oil. Scattered about the flatbread were chopped red peppers for a crisply sweet garnish alternative. Smashingly done, in our opinion.

As the night air continued to drop, I decided a little warmth was needed. A bottle of r1 had caught my eye earlier which I ordered neat with a small glass of water on the side while Eric went with a Makers Mark on the rocks. We ordered a single each, but what arrived to our surprised delight was very generously at least a triple. Being an aficionado of the grain in many various forms, the r1 was a rye whiskey delight. Inbetween sips, we both ordered a Rogue Mocha Porter with the wise intention of giving her ample time to warm-up for after-dinner enjoyment. What we didn’t factor into the equation was the cold night air, but we made do.

For my piece-de-la-resistance, I ordered the Ratatouille, a simple dish consisting of chopped zucchini, eggplant, yellow squash, bell peppers, and tomato topped by thinly sliced hot Italian sausage for a spicy kick and then baked to crisp, succulent perfection. I insisted my Ratatouille be served by an amazingly adorable mouse chef, but no luck; maybe next time. Eric ordered the TCP Rosemary Roasted Chicken, and both were delivered to us by our cheery waiter, John. The entrees were lipsmackingtastic and as with everything Eric and I ordered that night, we shared bites. To accompany our meals, we ordered a side of Portobello fries. That’s right, Portobello fries and they were disgustingly delicious. The Portobello used were huge considering the overall length and girth of the fries. Delicately battered and lightly fried, they melted in my mouth in an orgy of Portobello mushroom awesomeness. For dipping if one so chose to, there was a creamy Dijon mustard of sorts. Personally, I enjoyed them best naked.

My Ratatouille was rapidly disappearing inbetween shameless moans of sublime food indulgence, but Eric struggled a bit with his TCP Rosemary-Roasted Chicken. Using a whole chicken half sliced in two, the meat is left whole on the bone which involved more fingers accompanied by a knife and fork than anticipated. Overall, we loved the succulent chicken, pervasive herbs, Yukon gold potatoes, vegetables, and the slurp-worthy broth they were stewed in, but not the bone. In the leisurely time we took to savor our meals, the Rogue Mocha Porter had warmed sufficiently to allow her full array of aromas and flavors to shine. Unfortunately, the night air had seen fit to drop even more and with the checks signed, sealed, and delivered, we moved inside to finish our beer.

A lovely evening which left this beer geek foodie extraordinaire extremely satisfied. To top it all off, the menu taps out at $18 which is most affordable for the quality of food. Seeing as I have barely begun to conquer their menu, here’s hoping for many more tasteful nights of artisanal beer and artisanal food at the Town Crier Pub. 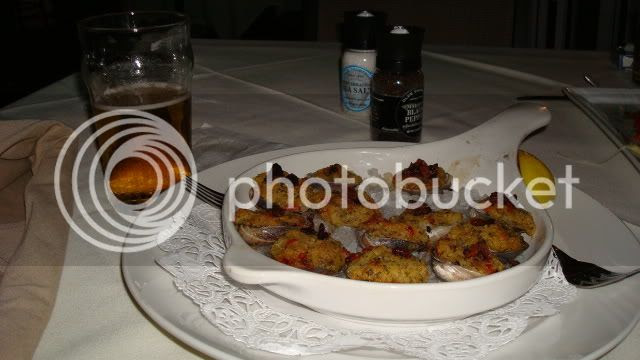 (an original written work by Kristyn Lier. plagiarism is not tolerated)
Posted by Kristyn at 12:18 PM